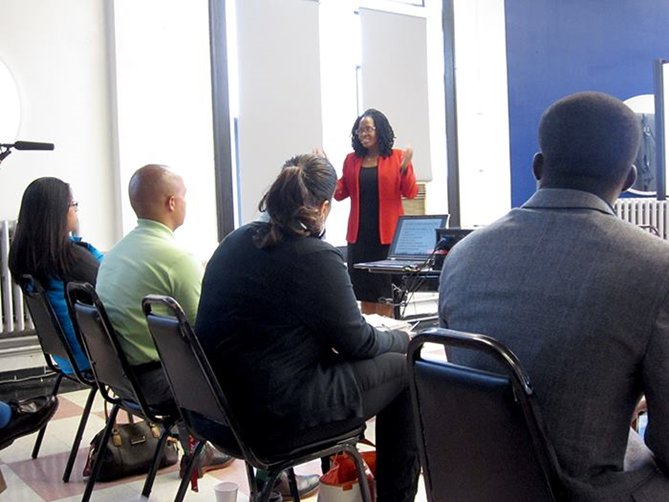 Vivica Brooks is the founder of The Brooks Group, LLC (TBG) a premier training organization committed to preparing, coaching and motivating the next generation of workers. Her background in management, leadership and training began at Marriott International, where she saw the opportunities and growth within the hospitality industry. After spending seven years at Marriott, Ms. Brooks ventured to the Washington, DC nonprofit, So Others Might Eat. Using her well-crafted skills, she built and taught a career-and-technical education (CTE) curriculum for certification.

True visionaries often have a moment when they know striking out on their own is a must. In Ms. Brooks’ moment, she realized, “I can do this myself.” Grounded in her belief that “the audience must be at the forefront of any kind of institutional design,” she opened the entrepreneurship door and began curating curricula that reflected that focus. Our conversation with Ms. Brooks focused on her proudest career moments, social-impact philosophy, longstanding relationship with the PATHS program and her vision for the future.

After starting the firm Bennett, Brooks and Dyson with two colleagues, their first program was working with youth in the Spingarn neighborhood of Northeast Washington, DC who were experiencing large amounts of violence. This program for high school students was successful in giving students something productive to do, providing new skills and offering the emotional and mental health support to ensure participant success. Continuing to focus in the northeast community, Ms. Brooks experienced another proudhearted moment. In partnership with residents of Brookland Manor, she and her colleagues created a six-week hospitality boot camp training to prepare residents for career opportunities at two newly opened hotels. “To our surprise and delight, the owner of the two hotels hired everyone from the class.” She is also excited about the recent creation of a curriculum for COVID-19 contact tracers, in the spirit of allowing “community to serve community.” Ms. Brooks and her colleagues are preparing their second cohort with new skills and employment opportunities.

Assisting people on their journey through the world of work by looking at the entire person – mind, body and spirit – and ensuring that they experience success are the core tenets of the philosophy Ms. Brooks follows in the social impact and wellbeing spaces. She is one of those outstanding trainers committed to cultural competency who understands you have to “make the book come alive.” TBG has developed an approach called “reality classroom.” For instance, a number of its DC students have never been on the National Mall or visited the Smithsonian museums. Part of TBG’s hospitality boot camp training is to “play tourist” for the day, allowing students to explore aspects of their city they normally would not. Creating curricula that augment real-life situations, such as navigating office politics or participating in a professional lunch, are other aspects of Ms. Brooks’ social impact philosophy that undergird student success.

For more than ten years, Ms. Brooks has been a consultant with PATHS. Dr. Plummer has always trusted Ms. Brooks to “just try and see” what will work with students. A teacher at heart, Ms. Brooks found that the PATHS students were individuals who simply needed direction; her role was to assist them on their journey. Her relationship with PATHS is one she cherishes because she is doing the work she loves. Its impact on young lives and the opportunity to watch students secure work and experience career advancement make it extremely rewarding. Ms. Brooks eloquently shared why she continues in her PATHS partnership: “It’s the work and the students that keep me going. We have great potential, but sometimes we haven’t been told we have potential, we don’t recognize it or we haven’t had somebody who can support us and bring it out of us. I grew up knowing I was going to be a leader and successful because it had been drilled into my head and I had no choice.”

Looking to the future, Ms. Brooks is excited to watch more students triumph through their presence in the classroom, completion of assignments and mastering of courses. Her ultimate goal is to create a world-of-work center that expands TBG’s current vocational training offerings to include working hands-on with first-generation college students on the college-application process. She is also interested in preparing students for college-level work prior to their arrival on campus. A self-admitted “tough instructor,” we know that as the journey of Vivica Brooks unfolds, students will be fortunate to experience and benefit from her dedication to excellence.

Reprinted from:
Soul Stirring (University of the District of Columbia)